The Academy at Penguin Hall wins the Schools Economics Challenge

Six students of the Academy at Penguin Hall, a preparatory school in Wenham, MA, US, thought they knew what they thought about the declining fish stocks in the waters off nearby Gloucester seaport. “When I heard about the issue I was very pro-regulation: you have one planet and you have to save it,” says Micaela Trzcinski, a senior.

Then Trzcinski and her fellow students, seniors Leah Humphreys and Kathryn Ward and juniors Marietta Atkins, Meghan Curtin and Elaine Turner (bottom right, with Sherry Cook, their teacher), decided to make a video about the topic for the first Schools Economics Challenge (SEC), which CORE has sponsored. They travelled to Gloucester and interviewed both regulators and the fishermen, to find out both sides of the challenge of overcoming the tragedy of the commons.

Speaking to the fishermen showed them that, while regulation might be best for the environment, fishing quotas also threaten the livelihoods of the people who earned their living from the sea. “I really understand now that it’s not simple. Regulations don’t always work how you think they would,” Ward explains.

The students shot two hours of interviews, and edited their material down to a three-minute video in a frantic near-deadline weekend in time to submit to the judges (you can watch it, above). The investment of time and energy paid off when their entry won the first prize of £500 (approximately $660).

The 2017 SEC was created by two teachers who have previously worked with CORE: Leith Thompson, of Burwood Girls High School, NSW, Australia, and Andrew Sykes, of St. Paul’s School in London, UK. The brief for student videomakers was to deliver a three-minute analysis of a topic related to where they live, using the work of a famous economic thinker, and to relate it to Unit 1 of The Economy. It was inspired by the First-year Challenge, a competition for first-year students starting their undergraduate economics course at University College London, which was created by lecturers Parama Chaudhury and Christian Spielmann. This year the SEC inspired entries on topics from homelessness to technology, from Marx to Malthus. “We thought that a competition that allowed students to use their creativity through a video competition would be much more exciting than a traditional essay-based format,” Sykes says, “The fact that we have had such great contributions from schools so far apart as Australia, US and the UK demonstrates the potential for this medium.”

The judges were Gill Hammond, Director of the Centre for Central Banking Studies at the Bank of England, Bob Denham and Raphael Fischer from EconFilms Ltd, and Professor Wendy Carlin, course director of CORE. They all thought that Penguin Hall’s entry was clearly the winner. Their analysis: “This video does a rare thing: taking economic theory and exploring how it relates to the world and real people. By doing so, it shows the value of economic theory and also its limits. The filmmakers have left the comfort of their textbooks and spoken to real people about real issues. It makes an excellent case for taking economics outside the classroom.”

“The winners produced a stand-out video with a strong, clear message explaining the concept of the tragedy of the commons and showing how regulating the fishing industry is easier said than done,” Hammond added. 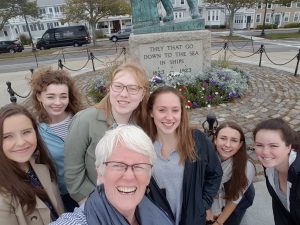 The Academy at Penguin Hall opened only a little more than one year ago, and prides itself on its interdisciplinary approach. “We’re trying to create real-world opportunities for our students so they can understand how their education will influence them when they leave. We recognise that we’re preparing these young women for careers that aren’t even created yet,” says Dean Tsouvalas, Director of Advancement & Communication. Among the innovations at the school: interdisciplinary courses that encourage students to develop independent critical thinking, and classrooms that can be reconfigured for many teaching styles – including one created to mimic a boardroom. Cook, who supervised the entry, added that their achievement, and the independent way they worked to structure and edit the video, demonstrates the value of this unorthodox educational approach. “I was nervous but they were calm, they were all over it. By the time they sent it in, I thought it was something special. The only guidance I gave them was to remind them: you have three minutes to tell the story.”

The students agree that the competition has helped bring economics to life. “My brother is majoring in economics and I used to say to him ‘why would you want to study that?’ After doing this project, I think economics is interesting and valuable,” says Trzcinski.

“Immersing ourselves in the problem and interviewing both sides really helped us grasp the issue. I don’t think we could have read about it in a textbook and understood it the way we do now,” Atkins adds.

You can email Dean Tsouvalas here.