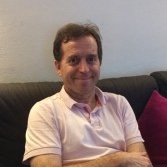 The introduction of the CORE Econ curriculum into the economics segment of the political science degree at the Autonomous University of Barcelona (Universitat Autònoma de Barcelona or UAB) has been a gradual process. Professor Francesc Trillas began inserting elements of CORE Econ’s The Economy textbook into undergraduate and graduate courses over three years, using the Spanish translation La Economía since it has been available this year.

He says that he found the experiments, ideas and data examples in the textbook both useful and interesting, adding that he has been a longstanding admirer of CORE Econ Project co-founder Professor Samuel Bowles of Santa Fe Institute. So, from September 2020 La Economía has been the main textbook for the undergraduate Political Economy course he teaches as part of the Political Science undergraduate degree. He actually gives his classes in Catalan using slides he has translated from the English CORE ones.

Professor Trillas says that he found that orthodox economics textbooks were not paying attention to recent developments in economics that had cast doubt on the traditional assumptions such as rationality and perfect market, for example. This use hit the heads after the 2008 global financial crisis when Los Indignados, the Spanish anti-austerity movement, called for changes to how economics was taught at university.

“The traditional courses also pay too little attention to pressing problems like inequality and climate change,” he says,

adding that they contained too much theory and a scarce amount of data and examples for students to work on. In contrast, CORE Econ has links to large amounts of material that enables teachers to split students into two groups, which can investigate different topics for discussion later.

Although the course that uses CORE Econ as its only textbook has only been underway since September 2020, it is already clear that the students appear very engaged particularly because of the focus on issues that have huge current relevancy.

“I have to be cautious on that, but my impression is that they are very positive,” Professor Trillas says, adding that attendance has remained high so far compared with previous years when it tended to drop off after a few weeks. “They ask questions and they send emails, so I see there is more involvement than in previous years but of course it’s too soon to tell.”

So far in the first term the feedback from students has been very positive, he says. “They ask a lot of questions, and I think they like the material. They are political science students, so I think that everything that connects economics with politics they like.”

A key advantage of CORE Econ over traditional textbooks is that in the online textbook and associated materials, students can find data, databases and experiments. “They are in general very progressive and very critical of society today, so they like that from chapter one we discuss capitalism,” Professor Trillas says. He has been promoting CORE Econ to his other teaching groups while his colleagues are also introducing it in the teaching of introductory economics in non-economic degrees at UAB.

He says that most of the first-year students are critical of society and of how societies are organised. “In a way, they are a bit surprised that in an economics course, we sort of sympathise with that without pandering to them. But we say, “OK, let’s investigate this”, and CORE Econ gives us the tools that will help us discuss these topics at a higher level.”