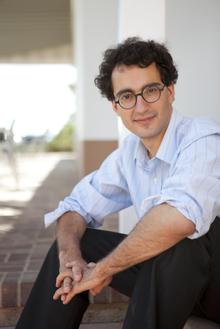 Simon DeDeo runs the Laboratory for Social Minds at Indiana University, where he is a professor of complex systems and cognitive science. He is also on the external faculty of the Santa Fe Institute (SFI). At CORE’s recent workshop at the SFI, he told us about how Isaac Asimov inspired a cosmologist to teach economics, his frustrations with the “positively ancient” introductory curriculum, and what economics can learn from the great physicist Richard Feynman.

What was your path into the social sciences?

I began as a physicist; after studying physics and mathematics at Harvard, and then Cambridge, I did my PhD  in cosmology at Princeton University with David Spergel. I was fascinated by the ways in which mathematical objects ended up predicting, and even explaining, the physical world.

But I had always been interested in people, and the possibility that mathematics might help us understand, and ameliorate, the human condition. Isaac Asimov’s Foundation series, which inspired me when I was young, gave a science fictional account of such a theory. I understand I’m in good company: Paul Krugman mentions the Foundation series as an early inspiration, and he’s even written an introduction to a reissue of those very silly, very flawed but very imaginative, books.

How did you get involved with CORE?

If you follow the most exciting ideas in the 21st century, it’s inevitable that you will end up, at some point, at the Santa Fe Institute. I came there first in 2008, and was given an Omidyar fellowship in 2010, which is when I met Sam Bowles, one of the leaders of CORE. I learned a great deal from Sam and his collaborators. Now I teach from a book by him and Herb Gintis, as well as some chapters from his microeconomics book.

When Sam asked me to come back out to SFI to hang out with some of the big neurons of The CORE Project, I was thrilled. I’d written a short piece on Herb Simon as a sidebar for one of the chapters in the CORE text itself, and had some sense of its ambitions.

What perspective does your background give you on CORE?

Despite claims to the contrary, economics has within it an extremely effective language that helps us explain the social world. But much of it is hidden behind a wall of mathematical formalism, reserved for graduate students and the energetic junior faculty who want to teach it. What you find in the introductory curriculum is positively ancient: 30, even 60 years out of date.

An example is the question of incomplete contracts in the labour market: what happens, for example, when someone hires you, but can’t monitor you 24/7, and so has to trust you’ll do the job? This is a ubiquitous problem: for most of us, it’s a basic experience of making a life. But introductory courses pretend it doesn’t exist and then, understandably, perceptive students feel cheated. As far as the standard presentations go, it’s too advanced to cover (I should know: I struggled with Herb Simon’s papers on this topic to write my sidebar).

CORE flips this. Incomplete contracts in the labour market appear in CORE’s Unit 6. There’s a huge amount of effort and rethinking to get this material in ways that newcomers can understand.

When Sam and Wendy told us the incomplete contracts story, I thought: “Where have I heard this before?”

Then it hit me: I was watching the birth of a “Feynman Lectures on Economics”. CORE is a collaborative endeavour, massively so. But it shares a great deal in common with Feynman’s one-man project to reshape physics, a project that continues to resonate 50 years later. The story of how Feynman tore up a curriculum that couldn’t meet the demands of the day – indeed, a curriculum that was actively turning students away – looks a great deal like what The CORE Project is doing now.

Simon has also written an article for us on what economics teaching can learn from the Feynman’s lectures on Physics. If you want us to cover your experiences teaching CORE, please email us at contact [at] core-econ.org.