In France many economists have been asking for a long time how we can make the economy exciting for high school students. But, then again, so have the teenagers who toil to learn about it, and the teachers who want to teach it. And France isn’t unusual.

The magic fortress of economic concepts often seems too abstract for the people aged between 15 and 18, who are discovering the economy for the first time. Understanding the economic structure of the world we live in will be essential for the next generation of citizens and policymakers. What if we could adapt CORE’s resources to high school and develop radically new ways of teaching it. This is the challenge that the Econofides project, launched at the beginning of the school year to 260,000 high school students in France, took up.

France is an ideal setting for anyone who wants to experiment with new ways of teaching economics in high school. All second students follow the same curriculum: 90 minutes a week of introduction for everyone in Seconde (Year 11), then 4 hours in Première (Year 12) and 6 hours in Terminale (Year 13), for those who decide to specialise in economics.

The program is directive too. Seconde students must learn how economists reason. Those in Première focus on markets, how they function and their imperfections. The Terminale program is much broader and embraces major issues in the contemporary world. It takes in sources of economic growth and instability, globalisation, sustainable development, labour markets and unemployment.

But this framework does not always fit the CORE paradigm on how to teach economics. An example: unlike CORE, students have to learn the perfect competition framework before they learn that in reality markets are mostly imperfect, and then study externalities, monopolies and public policies. But we felt that the diversity of the themes, and the possibility of making them alive and exciting, made it worth adapting the resources of CORE, and developing new resources especially for high school.

Hence, we created Econofides for trust (‘fides’) in the economy.

Who are we? A team of talented students and project managers from Sciences Po, led by me, who are working with the Académie de Versailles and a team of high school teachers. We are also partnering with Artips, a company committed to the democratisation of culture that specialises in micro-learning with short stories. The project is supported by the Ile-de-France Region, the Axa Fund for research and the Banque de France.

This collaboration is creating several digital resources that are adapted to the new programs.

There are open access ebooks for the Première and Terminale students, which adapt the content of CORE and its teaching resources, such as the interactive diagrams, videos, and quizzes, such as our “Introduction to Markets and Prices” for Première students:

For the Seconde students we will create a micro-learning platform, plus a platform for all high school students wishing to discover the economy: 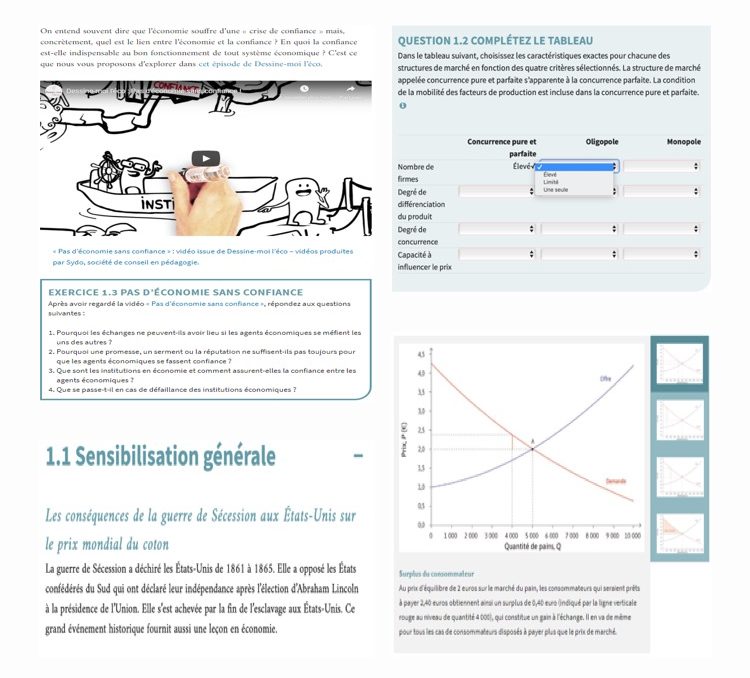 The platforms are full of accessible ideas, situations and anecdotes. The idea is to propose a concrete economy in which students recognise themselves. For example, the first chapter is devoted to the question “How do economists think?”. An important point is to explain the difference between correlation and causality, but these concepts are very difficult to digest for 14- and 15-year-olds. But they become much easier to digest when explained to them using the history of the strange relationship between the students’ spelling and the size of their feet!

Using this anecdote, we can explain the difference between correlation and causality and apply it to a contemporary economic situation, such as the relationship between growth and global warming. They make sense of causality and understand the role of omitted variables (in this case of course, their age explains both feet size and number of spelling errors, as in the image on the right).

Immediately they are given a quiz on the correlation between the level of chocolate consumption in countries and the number of Nobel prize winners. We finish off with anecdotes that explain the concepts of natural experiments and randomised trials, and one of the stories is about to reducing class size and academic achievement (in tribute to Esther Duflo, our French Nobel Prize winner). 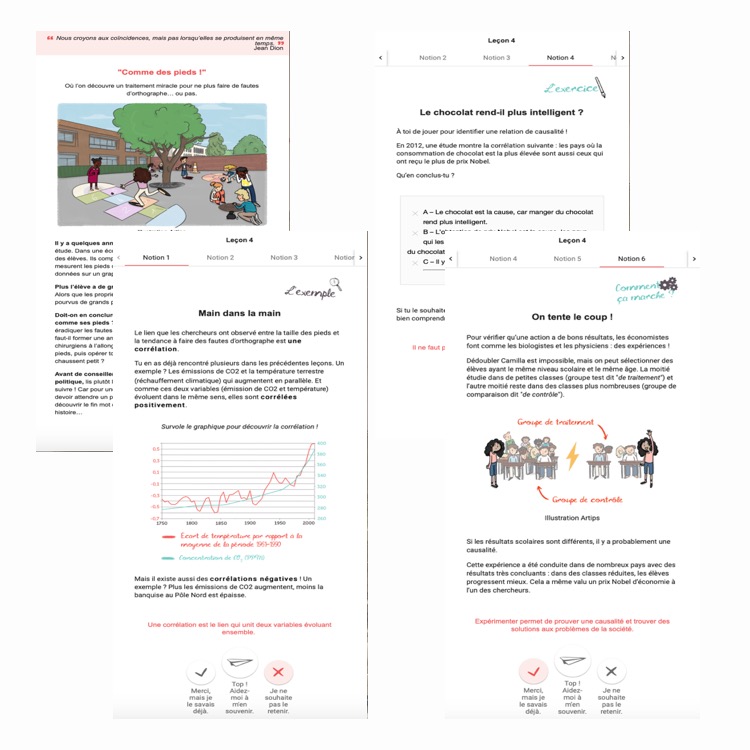 Through the content of the courses, students project themselves into—and interact with—the economic principles that govern their lives, often without them knowing it.

After months of work, our Econofides project is finally launched. The courses contribute to the democratisation of the economy, but also offer new educational opportunities: reverse pedagogy, teamwork on case studies, individualisation of student follow-up, while respecting the teaching freedom of teachers. And French high school students who now have a much better introduction to the complex world of economics.

Yann Algan ([email protected]) is dean of the School of Public Affairs at Sciences Po, Paris.