Students who embarked on undergraduate economics courses in the autumn of 2020 found themselves trying to understand the impacts of the most serious health and economics crisis for at least a century. While the world is still engaged in the fight against COVID-19, leading academics are already thinking about the lessons the pandemic has for the way economics is taught.

As Anne Case, emeritus professor of economics and public affairs at Princeton University and co-author, with Angus Deaton, of the book Deaths of Despair and the Future of Capitalism, pointed out in a New York Times panel, the Gilded Age of the late 1880s United States eventually led to the Progressive Era of the 1900s.

“Inequality in income and wealth were as high then as they are now, but the time was ripe for legal changes limiting corporate power. It is possible we could see an overwhelming consensus develop that we cannot continue to run health care as we have,” she said.

That concern is shared by students. Since 2016 we have asked teachers around the world who use CORE to run a simple word cloud exercise. On the first day of their classes, they ask their students to answer, with one term or word, the question: “What is the most pressing problem economists today should be addressing?”. We use the results to create word clouds for each university and one global cloud for that year. Over the four years to 2020 inequality has been students’ dominant concern as the word cloud below shows.

Although inequality still topped the charts in 2020, unsurprisingly COVID-19 emerged this year as an equally prevalent concern among first year students. Even though the pandemic is a health crisis, decisions by governments to shut down large parts of office, retail and entertainment life have made it an economic issue. Our poll of over 3,500 students from 17 universities in eight countries shows that Covid-19 is seen as almost an important an issue as inequality.

The 2020 word cloud shows that concern over long-term economic issues such as climate change, sustainable development and resource scarcity far outweigh “traditional” macroeconomic issues such as growth, optimisation and productivity. In fact, inequality was the prime concern for students in 11 out of the 17 universities that took part in the exercise – and in seven out of eight UK universities. In University of Bristol and in King’s College London and University College London, it was by far the overwhelming issue for students.

Professor Cloda Jenkins at UCL said she was not surprised inequality was still the most pressing issue as COVID-19 had highlighted more than ever the scale of inequality within and across countries. “The students recognise, not least from their own education experiences in 2020, that the disease, and government measures to manage the pandemic, impact the lower end of the income scale far more than the top end,” she said. “This fits very well with the way that we teach them.”

COVID-19 was the number one issue for students at three universities: Colegio Universitario de Estudios Financieros (CUNEF) in Madrid, Partido State University in the Philippines, and the University of Strathclyde in Scotland.

Given the sequence of major weather events over the past year it is no surprise that climate change featured heavily among students’ responses. Although it was not a number one concern for students at any one institution, it came at or near second place in five – University of Bristol, University of Exeter, University College London, University of Missouri-Kansas City and Pompeu Fabra University (UPF) in Barcelona.

Professor Carlos Cortinhas at University of Exeter Business School said climate change may have caught students’ attention because many of them had read the CORE textbook, where the issue features heavily. “Unit 1 of the Economy, Society, and Public Policy textbook starts to look at the state of the world in terms of inequality and introduces the issues surrounding climate change.” 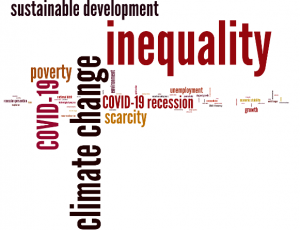 Given the large rise in the number of workers either losing their jobs permanently or, in some western economies, being put on furlough schemes that paid the majority of their wages, it was also not a surprise to see unemployment feature in the word clouds. It was the primary issue for students at

two universities – Presidency University in Bangalore, and University of Melbourne in Australia. The

unemployment rate in India hit an all-time high of 23.5% in April, according to official statistics.

Dr Prithviraj Guha, Assistant Professor at Presidency University, said: “The students came to perceive the size and vulnerability of the informal sector unemployment more closely because of the pandemic when millions of migrant workers found themselves jobless and the situation was covered widely in the media.”

The word cloud exercise shows the issues that concern economics students are the negative outcomes in the world where economic policies can provide the solutions but may also have contributed to their creation. The pursuit of fairness in outcomes appears to trump the focus on efficiency that has dominated the traditional economics agenda.

This is why CORE curriculum raises concepts such as inequality and environmental damage in its opening units and provides a balanced role to these questions and learning objectives in curricular projects. These word clouds show that the issues CORE aims to cover at the outset of a student’s learning journey through economics are the ones they want to be given the skills to tackle.

Can we help learners use economics to understand the fast-changing world in which they live?

Making CORE textbooks accessible to everyone