“We, economics students of the world, declare ourselves to be generally dissatisfied with the teaching that we receive… We wish to escape from imaginary worlds!”

So began the open letter from 1,000 unhappy French economics students, published in Le Monde on 17 June 2000, that with hindsight kickstarted student protests over economics curriculum reform. When the International Student Initiative for Pluralism in Economics, a coalition of 65 student societies, published its own open letter in 2014, it claimed that “we are dissatisfied with the dramatic narrowing of the curriculum that has taken place over the last couple of decades.”

It has become conventional wisdom that traditional economics courses do not satisfy the desires of students. But is this true of most students, or just a vocal minority? Even some who advocate curriculum reform doubt whether the majority of students are really “generally dissatisfied”. Dennis Snower, president of the Kiel Institute for the World Economy, pointed this out in Frankfurter Allgemeine Zeitung in February 2015: “Almost everyone is opposed to fundamental changes in teaching… [including] the students who often learn by heart and don’t want to think in new ways.”

For the last two years we have tried to answer this question about students using a new approach: asking them. We asked CORE teachers around the world to pose the question to students before beginning their course: What is the most pressing issue economists today should be addressing? We then collected their responses as word clouds.

This isn’t a rigorous experiment, so the results are indicative only. They suggest, however, that the mainstream of students everywhere want a broader, more relevant curriculum. And remember, these students hadn’t studied any economics at this point, and they had not chosen to study CORE in preference to any other textbook.

First, compare the students at the University of Los Andes (top) in Bogota, Colombia and the University College London (bottom). It’s remarkable how similar their contributions are, and what dominates their thinking. 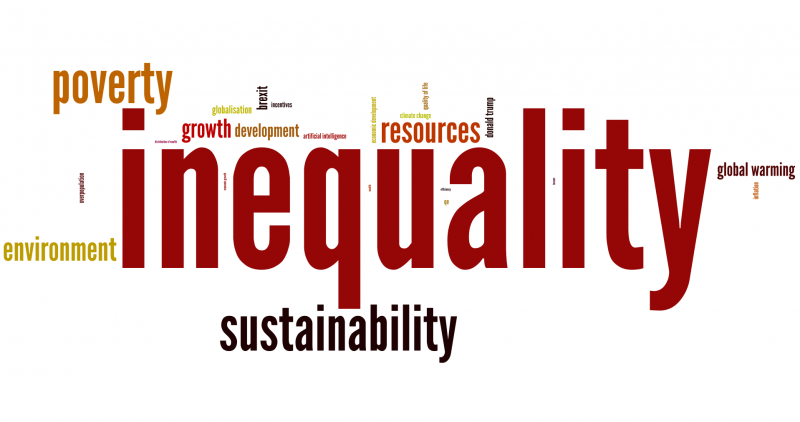 When we aggregate across all the universities that took part in our experiment in 2017, inequality is still overwhelmingly the most important thing on the students’ minds (surprisingly, this was also the case when we put the question to employees at the Bank of England in 2016). 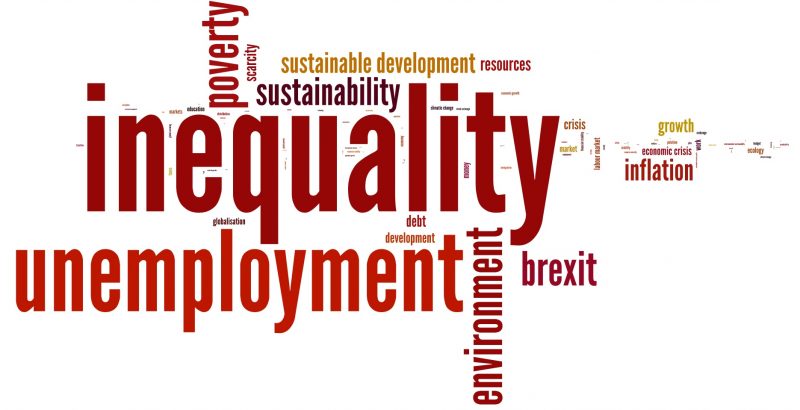 When he did this experiment last year, Nikolaus Wolf, Professor of Economics at Humboldt University, wasn’t surprised to see inequality dominating the thinking of first-years. “Students today seem to feel that the issue of inequality is no longer far away, but actually important within Germany and our European neighbours. I think it is an important factor to understand why Europe is disintegrating.” Although it dominates their thinking, historically they would have had to wait until Chapter 20 of Mankiw’s Principles to learn about it (we introduce inequality in Unit 1).

But we shouldn’t think only about the aggregate “representative undergraduate”, and assume that all students are the same. For example, at the University of La Réunion, one issue dominates to the point that it’s hard to make a word cloud out of the responses:

“It’s not a surprise for us that our students consider that the problem of unemployment is so important,” says Dr Zoulfikar Mehoumoud Issop, who teaches the introductory course. “In 2014, the rate of unemployment in Reunion Island was 54% for people between the ages of 15 and 24.”

And at the University of Arkansas, where adopting CORE has saved students $100,000 in textbook costs, poverty and debt are more salient: 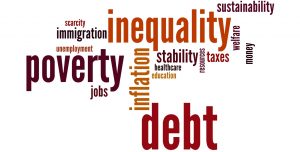 Updating a curriculum means teachers must solve two problems. First, to reflect day-to-day experience within a structure that teaches students the important tools of economics. But it’s clearly also important to “act local”, and adapt teaching for different economies, and views of the world. Our volunteer translators in places like India are not just doing word-for-word translations: we hope to localise our text too, adding relevant data, different examples and new text. We also know that many of you are taking advantage of our Creative Commons licence to combine CORE with your own material.

These words clouds show that curriculum reform isn’t just about pandering to a few fanatical students. It’s about helping the next generation of economists everywhere make sense of the real world they experience, in the place where they live.

You can view more recent results from the 2018 exercise and from the 2020 exercise.