From UCL: Results are in!

“But, will students who took the CORE intro course be well-prepared for their intermediate economics courses in year two?”

Since the introduction of the CORE syllabus at University College London in 2014, this was the question we were most regularly asked by colleagues. Teachers, administrators and even students echoed this concern around the world.

We were often tempted to answer: “Yes – they will do well” – we were confident that CORE was teaching them both the economics and the techniques to excel in their future studies. Instead, we waited until we could bring some evidence to bear on the matter.

We can now, finally, provide a preliminary answer (as any scientific answer should be): “The available data so far indicate that our students are very well prepared for their intermediate studies in micro and macroeconomics”.

Former CORE students did better in both micro and macro

Comparing this year’s exam grades with those of the previous cohort, which had studied a traditional introductory economics course, the results confirm our original hypothesis! In both micro- and macroeconomics, the CORE cohort did on average significantly better than their non-CORE counterparts.

We think both results reflect the effect of the CORE-based first year course on student motivation, which appears to boost effort and engagement in the second year of study. 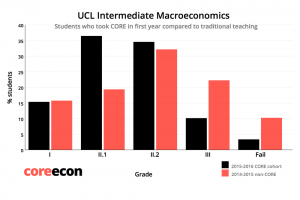 We also feel that by providing a less mechanical and more thoughtful and reflective training, the CORE material may better cater for the needs of advanced courses.

(Note: For readers from outside the UK, according to the Higher Education Statistics Agency, a First class (I) degree is given on average in UK universities to 20% of students, an Upper Second (II.1) to 50%, and a Lower Second (II.2) to 25%. Third class (III) degrees are awarded to 5%.)

Were the cohorts similar? 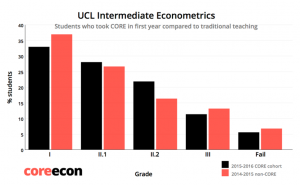 There is no evidence that this was an unusually talented group of students. The same cohort’s performance in Econometrics, a second year course taken alongside Intermediate Microeconomics and Macroeconomics, is very similar to their predecessors’. Since econometrics is, by nature, less related to the subject matter of introductory economics and more to statistics, the stability in performance for econometrics encourages us to think the clear improvement in macro and microeconomics may not be due to a more able cohort.

Strongly rooted in empirics and real world challenges, the CORE curriculum tells its story from the back, starting with observations and empirical regularities, and then introduces students to the economic tools needed to better understand the questions of interest. Traditional textbooks usually start from “the perfectly competitive market” and only looks at other institutions as anecdotal deviations. But (perhaps, curiously, seen from outside) this is not the way professional economists think nowadays. In CORE we start with a more modern approach, in which we think of individuals and societies as entities that have to be organised and take decisions, and do so as best they can. In this process, the rules (written or unwritten) that regulate their interactions are crucial to the final outcomes.

CORE is rigorous in the sense that it demands students to carefully reflect and apply the appropriate analytical and empirical tools in order to analyse real world problems. In addition, it teaches students from early on in their studies, that professional economists use narrative and graphical representations of models as well as mathematics. This approach seems to pay off when it comes to learning and understanding a more technical treatment of economics.

Of course, it is too early to make bold claims about the effect of the CORE syllabus on student learning. A more elaborate analysis on this topic is underway. Nevertheless, these statistics give us more confidence that revamping our first year introductory economics course is a step in the right direction.