On 4 June Gonzalo Paz Pardo, one of our Postgraduate Teaching Assistants, was one of only 12 people (and the only teaching assistant) to win a Provost’s Education Award for his work at UCL.

The UCL Education Awards “recognise the work … that has enabled excellent practice or facilitated innovation in teaching and learning”. In Gonzalo’s case they praised his “level of carefulness, empathy and deep regard for the teaching activity,” described him as “a dependable and supportive guide for junior staff and an invaluable contributor”, and called him “a model for all PGTAs at UCL and well beyond.”

Gonzalo has been a teaching assistant on CORE for three years, helping both students and other TAs. He has followed the development of the course at UCL since the first beta units. He has also participated in its development, having probably suggested more corrections and improvements to us than anyone else. He discovered some of them while he was teaching, and sometimes they were found by his eagle-eyed students.

Because many TAs will be teaching CORE for the first time in the next few months, we asked Gonzalo for five tips to help new TAs prepare. Don’t worry if it takes some time to adjust to the new ideas in CORE, he says, it’s the same for everyone who learned their economics from traditional texts. “Every TA I have worked with, including myself, has struggled to explain inflation in this course,” he jokes.

1. Approach the course with an open mind

Many new TAs tie themselves in knots trying to interpret some of CORE’s models using the assumptions and ideas that they were taught when they were taking introductory courses. Gonzalo’s advice is, don’t even try. “Don’t be scared, but it will be very different to the material you’ve used before,” he says, “so think about the economics, don’t try to think about previous models you have studied. Sometimes new students will surprise you because they’re fully on board with the CORE model, whereas people who studied economics before are still trying to put the pieces together.”

Before you dive in, it helps, he says, to thoroughly read each unit, and pretend that you are learning for the first time. This helps you prepare for tricky questions. “See it as a first-time student would see it,” Gonzalo says.

“The treatment of the labour market is challenging, both for students but also for new TAs,” he warns. In Unit 6 CORE has tried to make a more realistic model of the labour market, which is also important in many subsequent units. As the teaching guide to Unit 6 puts it: “Teaching market-clearing labour models has a fundamental problem … In the past we have made the assumption that the market clears in microeconomics, and then generate unemployment either through price controls (such as a minimum wage) or assume some kind of friction like sticky wages in macro models. Neither of these analytical solutions is satisfactory.”

So Gonzalo advises his TAs not to think in terms of traditional labour market models to avoid confusing themselves, and their students. “If you start out drawing curves of labour demand and labour supply, this is where they cross, you’re going to get lost. But in the end the CORE model does work better than standard teaching, because the students are more convinced by it. And we don’t have to tell them that unemployment is caused by the minimum wage.”

4. Be prepared for critical discussion

The course encourages students to look critically at the assumptions in economic models, which can lead to lively tutorials. “When you have a model that is about things like inequality in the world, or even about personal decisions such as how many hours you choose to study, it’s much more open to discussion,” Gonzalo says, “but not everything that any model predicts will be correct, and students will notice this. So ask them what it is in the model that’s missing. I tell them that they can do research on these things.” Having open discussion can also help create understanding, he adds. For example, when working with a group, ask students to explain the model to each other, rather than explaining it to them.

5. Keep the connections in mind

There are common themes running through many units in CORE: the importance of rents, power, or incomplete information, for instance. “But students will be focusing on the unit they have just studied, and if you ask them about something related to it from three weeks ago, they often will have forgotten. When we are studying interest rates for example, we can say to them, this relates to income and substitution effects, and describe those again,” Gonzalo says.

His advice: refer back whenever it’s useful to do so, both to cement what they learned in previous weeks, and make it clear that the new material builds on these ideas. There are many references to previous units in the text, and if TAs email us to be approved as teachers, they can download the teaching guides that explain these links.

… And remember, you’re a team

All of these adjustments are easier if you meet regularly, Gonzalo suggests. UCL’s TAs have a weekly meeting, which some lecturers also attend, to discuss ways to to approach that week’s teaching. At the University of Warwick, TAs and teachers are preparing by holding a reading group. But TAs can also meet informally, he says, for example to practice ways to explain difficult concepts.

Also, soon TAs will also be able to take advantage of CORE Labs, one of our new features for 2018. If you have a question or a problem, simply ask on this shared discussion board, and other TAs or teachers from across CORE can offer ideas or solutions. “Remember,” Gonzalo says, “this is a group effort.” 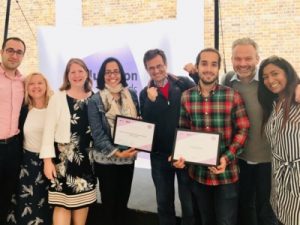 Gonzalo wasn’t the only member of the CORE community to be recognised in the UCL Awards this year. The Centre for Teaching and Learning in Economics (CTALE), (right) was awarded for its “efforts to encourage cultural change … The team developed a holistic approach and included Faculty, students and the professional services team, where they developed a series of initiatives and innovations to embed active research across all modules.” CTALE has been extremely helpful to CORE, generating support material for teachers, as well as showing us innovative new ways to teach and learn economics.