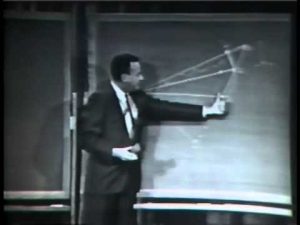 We asked Professor Simon DeDeo, who runs the Laboratory for Social Minds at Indiana University, to tell us more what we can learn from Richard Feynman (right), whose introductory physics course, first given between 1961 and 1963, tore up the old physics textbooks and has since inspired millions of students.

At the recent CORE workshop at the Santa Fe Institute, someone said: “CORE is bringing the frontiers of economics to the front of the book.”

Sam Bowles urged me to look at the contents page of an introductory economics textbook. I was shocked. The tremendous strides we’ve made in economics in the last few decades were barely there.

The frontiers are in the final chapters, where they don’t get taught. Chapters on behavioral economics and asymmetric information, even game theory, were at the end of the book, like an afterthought. This book taught economics as if the economy was always in equilibrium, contracts enforced themselves, bubbles never happened, and people were sociopathically selfish.

For me, a light bulb went off. I’d heard the story of what CORE wanted to do before: it was what Richard Feynman had done for physics, my home discipline, half a century ago. If Feynman were alive today, he would have ridiculed that textbook’s concept of economics.

In 1961, Feynman was at The California Institute of Technology (Caltech), teaching introductory physics. He was just four years away from winning the Nobel prize for work so complex it was (and still is) reserved for a small elite.

Undergraduate students wanted to learn how relativity and quantum mechanics had led to radical new ideas about space, and time, and matter. But they were fobbed off with inclined planes and electrostatics: science from decades ago in a textbook by Robert Millikan. Millikan had won his own Nobel prize: in 1923. Students could study what they came for only in advanced courses, or if they did a PhD.

Feynman sympathised: he was already leading “Physics X”, a semi-secret discussion group. He junked Millikan’s textbook (Chapter 19: Hygrometry; Chapter 20: Archimedes’ Principle), and wrote his own course, which we now know as The Feynman Lectures on Physics.

Taking undergraduates to the frontier

He was convinced that first-year students could be given a language for modern physics—one that they could learn to speak without years of technical training. He would take them to the frontier using a plain, language with a minimum of mathematics.

For the first time at Caltech students would learn quantum mechanics. They would learn the connection between the statistics of particle scattering and the bizarre properties of liquid Helium, where the atoms of a macroscopic substance could share a single quantum state.

They would study the ammonia maser, whose basic units were states of the world that defied the classical imagination—and which contained, in miniature, the story of the laser. They would study the properties of electrons in a lattice, and the basics of the transistor.

Physics as if the previous three decades had happened

Could these things be taught to first-year students? (And, indeed, was Feynman, with his reputation for genius, the right one to try?)

It was a massive success. Senior faculty came to the lectures. Transcribed, Feynman’s Lectures on Physics have sold 1.5 million copies in English, and been translated into 12 languages.

Throughout an amazing career, and in a thick, working-class New York accent, Feynman had delighted in showing up powerful and self-satisfied elites, from his high school in Far Rockaway, Queens, to the military command at Los Alamos, and finally to physics itself, which could become lost in a dense mathematical thicket that left it unclear whether anyone in the room actually knew what was going on.

Feynman’s once said: “If I can’t explain it, I don’t understand it”. This should be CORE’s mantra too. If an idea matters—and we, as working researchers, truly understand it—it should be something we can explain, with time and effort, to a newcomer.

It’s interesting to imagine what Feynman would have made of the best ideas in economics today. But when it comes to how we teach it, it’s clear he would have thought The CORE Project was long overdue.