Today we are launching beta versions of the first five units of a new ebook called Economy, Society, and Public Policy.

Wendy Carlin, CORE course director, says that this “is for all of those people, whether they’re in university or not, who are interested in better understanding the world. And I think we’ve realised over the last few years that there’s a real hunger out there, there’s a real curiosity on the part of the public and a very broad group of students to understand what’s going on in the economy.” 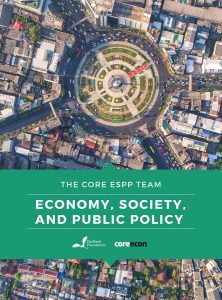 When we created The Economy—our ebook designed for introductory courses for economics students—we were constantly struck by the enthusiasm and curiosity of the students we surveyed to find out about how people interacted with each other and the natural environment to provide their livelihoods, and how that changed over time (and how policy and citizens could effect change). We tried to inspire students with a toolkit that they could use in future to turn their curiosity into new insights.

Connecting to other disciplines

It would be ridiculous, though, to assume that every learner who feels that hunger is already enrolled on an economics course. Curiosity about the world, our place in it, and how it changes and can be changed is a feature of almost every field of study. But we also heard, from both teachers and students, that economics for students with other majors, or for those students who were still considering which major to take, seemed abstract and unengaging.

Both students and teachers of politics or other social sciences who wanted to focus on policy were frustrated by abstractness, or the back-of-the-book position of policy in existing texts, Carlin says. They “just don’t feel connected with what’s going on in economics. And that’s another part of this project, which is to bring in people from all those different disciplines, get people working together … over time we will build a community of curriculum developers, people testing and using the course, and talking across these disciplinary boundaries.”

Using The Economy for courses designed for non-economists comes with a steep learning curve for both teacher and students. Hence, we wanted to produce units that are inspired by our previous work (and which share some of the discussion, figures and models), but are accessible to a wider range of students. That is why we are creating ESPP, together with the same number of empirical projects under the title Doing Economics.

ESPP is also unusual among economics texts because we bring in the study and evaluation of policy, whether that policy addresses a sugar tax or tax avoidance, at the beginning of the course—rather than treating policy analysis as an afterthought.

Arthur Grimes, the former chairman, Reserve Bank of New Zealand and now chair of Wellbeing & Public Policy at the School of Government, Victoria University of Wellington (and one of the team that helped create ESPP), explains the importance that economic policy—whether you want to make it or understand it—has for all citizens: “It is vital for anyone who influences or makes decisions involving public resources to understand fundamental economic concepts such as ‘opportunity cost’, together with the importance of incentives for affecting people’s behaviour,” he says, “it enables people to think clearly though public policy decisions—both at the highest levels and in making routine day-to-day decisions. These skills are also useful for the wider public, especially when they are influencing the political process.”

A focus on using data

ESPP will be innovative because we will focus not only on learning economics, but on using real-world data to teach data-handling skills that are becoming valuable in many courses, and many jobs.

This was one of the aspects of ESPP that convinced the Nuffield Foundation to grant-fund its development, says Simon Gallacher, the director of student programmes: “There are definitely students making up their minds to choose courses that have a higher degree of data engagement than they expected when they applied to go to university,” he says, “they can see the utility of having quantitative skills at their fingertips.”

As well as short data-handling exercises in the units, we are creating a set of standalone projects in which students will learn by using real-world data to investigate a policy problem, called Doing Economics. We have posted the first five of these Doing Economics projects in Excel format. Others will be posted as we finish them, as well as versions that use (and so help students to learn) R.

We are releasing the first five units now for three reasons:

Finding out more about ESPP

If you want to see what ESPP can offer, dive in. Like all our material, ESPP is free, and open-access.

Or, you can read these short blogs:

To hear more about the thinking behind ESPP from a few of the people who have been instrumental in its development, listen to this short podcast (9 mins).

As usual, @coreeconteam will be active on Twitter, answering your questions and listening to your comments.