The elephant in the classroom in three acts: Training economists in Latin America

For about two years now, since we launched our new undergraduate program in economics at the Universidad de los Andes, we have been doing a very interesting exercise with the students on their first day of classes. We ask them to write in a phrase “What is the question you would like answered when you graduate as an economist?” Here are some images of handwritten notes by our freshmen with their answers:

“To what extent is poverty required for economic wealth?”

“Is it possible to create an equitable and fair economic model that transforms the unequal realities of the world?”

“Is it possible to establish an economic model that is sustainable and ends (or does not create) inequality?”

“Is it possible to create with economics a society where inequalities are minimal, opportunities are available to all and that is considered successful?”

“How can I contribute to make a country more fair?”

“How can one use the principles and studies of economics to minimize the inequality in the world?”

“Why are there so many people suffering because of inequalities if there are so many capacities and resources in society and in its individuals to avoid it?”

“Is it possible to eliminate poverty and socio-economic inequality in a capitalist economic system?”

You might think that I’m doing a bit of “cherry picking” by choosing phrases that draw particular attention to the question of social and economic justice. However, questions like these are much more frequent than, for example, solving the problem of producing a larger social and economic pie, or finding an efficient use of resources, or reducing the corruption that is gaining so much attention these days. 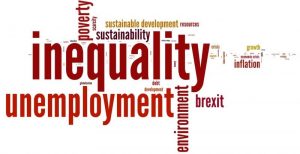 We have written about the results of the 2016-2017 exercise, 2018 exercise and 2020 exercise. You can check out these blogs to see how responses have evolved over time.

With the purpose of extending the exercise, for the past year we have asked two cohorts of our graduates, four years later and at the day before their graduation, the same question. “What is the most urgent question that economists should answer today?” The word cloud that resulted from the group that graduated in March of 2018 does not differ in any way from the two previous acts in this story. 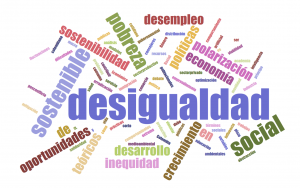 There it is, inequality the elephant in the classroom, both for our students who start studying economics as well as for recent graduates.

Several questions open up then. One of them is whether this view is widespread in other countries of the Latin American and Caribbean region. We are indeed one of the most unequal regions on the planet, but this does not mean that students of economics always come to study, or graduate, thinking that this is the most pressing problem for the profession.

I invite readers who have access to a sizeable number of undergraduate students to replicate the exercise, share their data with my commitment to compiling and sharing the exercise over this start of the 21st century. After decades of anguish in the region due to the problems of inflation or exchange rates at the end of the 20th century, new challenges are opening up in the eyes of our students who will ultimately govern in the public, private and social sectors of our countries.

The next question is “Why are Latin American economists teaching intro not talking about the elephant in the classroom?”

Are we equipping students throughout their studies to address this question about inequality. One should note that economics is a discipline that since its origins has been concerned with the problems of justice and the distribution of opportunities and results. It is also a fact that the training of economists in our region is quite homogeneous, as reported almost a decade ago by Eduardo Lora and Hugo Ñopo, but where, interestingly, the concern for inequality does not appear to be central.

The tools are there, in principle. Economics has made great advances in recent decade in the representation of labour and credit markets using principal agent models, strategic interaction and conflict using game theory, exploring people’s sense of justice with behavioural experiments, giving more careful attention to how economic and political institutions affect economic outcomes. Our students learn about methods to measure poverty and inequality, and have technical apparatuses to explore the causal factors that affect variables of relevance in economics, as well as the micro or macroeconomic channels or mechanisms that can explain them.

However, in most courses problems of efficiency are central;  distributive problems are an afterthought. Our texts, exams, problems and case studies concentrate much more frequently on whether the equilibrium solution is efficient, as opposed to the number of cases when we ask whether the solution is fair.

Of course, the second criterion has the problem of subjectivity and impossibility of aggregation of preferences, while regarding the first criterion we can build consensus on the metric and acceptable levels for the majority. But should that be the reason why we shun a stronger economist training on the problems of distributive justice in economics? Example of this is a test I do frequently with students who have already taken their first course in Game Theory. I find systematically that they are much better trained to identify the Nash equilibria of a game than its Pareto optimal solutions.

Asking ourselves for fair and not only efficient solutions opens up a more complex world for the training of economists. If, on top of that, we seek solutions that are democratic and sustainable, the challenge is immensely greater. This attempt to give a more balanced role to these questions and learning objectives is reflected in curricular projects such as CORE where these questions are opened from the first units.

Our future economists will be better equipped if we offer them a training in which the tools we provide allow them to face these questions, and in particular that of inequality. Today we have, for example, good and simple models to explain why most humans reject unfair offers in the Ultimatum game, and therefore leave money on the table. We have better explanations of why very often and under the right social norms and regulations, despite the pecuniary incentives, individuals consciously decide not to take advantage of others in a problem of public goods or a prisoners’ dilemma.

These few examples show that we can and should transform the instruments we use in introductory courses in economics at the undergraduate level, from which most economists who practice the profession graduate. Recall that very few undergraduate students make their transition to graduate school at the doctoral level where these new approaches and tools are now almost mandatory material. The vast majority of economists graduate today with tools that mainly serve to assess whether a solution is efficient, and with fewer tools to discuss if it is fair. However, the question of what is fair is part of our emotional, neurological, social and economic wiring.

The elephant is not going to politely leave the classroom.  The inequality question should occupy a more important place in the training of economists.