The winners of the CORE Doing Economics Competition 2019

On 18 February this year, we issued the challenge to undergraduate students around the world, in any discipline, to use our Doing Economics empirical projects to produce a report “that identifies a specific policy problem related to one of the following topics: climate change, well-being or inequality; explain why it is important, and suggest how it can be solved”.

And so, today we are announcing the winners of the CORE Doing Economics Competition 2019. We are grateful for the Nuffield Foundation’s funding for Doing Economics, and for funding the competition.

Bearing in mind that these are problems that have consumed policymakers around the world, we wondered how many students would rise to the challenge. We’re excited that so many of you did. The projects in Doing Economics are designed to be accessible to economists and non-economists alike, and we were pleased that our entrants came from many different types of undergraduate course. The process of picking winners exhausted but delighted our three judges: Fiona Dawe, Head of Sustainable Development Goals at the Office for National Statistics, John MacInnes, Associate Dean (Quantitative Methods) and Professor of Sociology at the University of Edinburgh—both are members of the CORE EQuSS Advisory Group—and Eileen Tipoe, a Fellow in Economics at the University of Oxford, and one of the authors of Doing Economics. All entries were anonymised before judging.

“The standard of entry was very high with strong, meaningful use of data to provide evidence-based policy recommendations,” Fiona says of the overall standard, “The diverse approaches to the policy issues raised new considerations and questions that deserve further, data-led, exploration.”

And so to the winners. Because each of the projects in Doing Economics has equivalent versions using Excel and R—we included R partly because the educators and employers we spoke to told us how highly rated the skill is for employment and  internships—the competition has a winner and runner-up for both Excel and R projects.

The environmental costs of being selfiesh (download), by Matteo Salis, Francesco Cinquegrani, and Michele Colace, University of Turin. 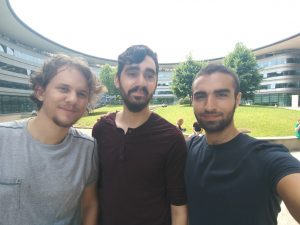 The title is not a spelling mistake. The judges unanimously agreed that the subject chosen by the authors (left to right: Francesco, Michele, Matteo)—the climate impact of an online activity such as taking a selfie, and how to mitigate it—was innovative and interesting. (“Very original angle, clear and focused report … The reader was invited to make the connection that even the most innocent-looking personal activity has climate implications.”)

Judges also enjoyed the way the report translated values attached to online activities that mean nothing to most people (tonnes of C02) into quantities that we can all conceptualise and compare. They did this by creating a converter, called the ‘Selfie Index’, which measured the total emissions created by the production of a single selfie. This led to the startling conclusion that, in one day, an average tree can barely absorb the CO2 created by ten selfies. The same technique can be used to calculate and compare the emissions created by other types of online activity—for example, watching Netflix (see the figure below).

Their policy proposals include compulsory reporting by the ICT industry on their emissions, and pop-up notifications for consumers on the environmental costs of their online activities.

Matteo and Francesco have finished the second year, and Michele is in the third year of a degree in Economics and Statistics. “It not only focuses on standard economics, but also on more recent developments on the field, along with a solid quantitative and statistical background,” Matteo says, “After joking about selfies and how everyone posts pictures on social media, we decided to use it as a user-friendly, innovative unit of measurement. We mostly spent our time cursing at graphs that didn’t turn out as planned, and drinking a year’s worth of coffee in a single month.”

And so the report seems to have given them an accurate insight into their future working lives. 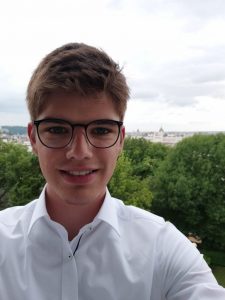 Johannes (right) has just finished the first year in studying social sciences at Sciences Po Paris, Campus Européen Franco-Allemand de Nancy—an external campus of Sciences Po with a regional focus on the European Union. As well as economics, he has taken courses in law, sociology, philosophy, maths for social sciences and history, which helps to explain why the judges were so enthusiastic about the strong policy recommendations in Johannes’ report. (“Detailed analysis of the policy issue and discussion of two solutions that could address it … Original focus of investigation, good use of data and visualisations—sound recommendations.”)

He notes that the German ministry responsible for traffic has so far not proposed policies for cutting emissions, unlike most other sectors, and that emissions in the sector are rising (below). His policy recommendations include a ‘chit’ system, under which drivers would buy permits to pollute and the revenues would be invested in non-polluting sectors, and an adjustment of individual taxation to account for each car-owner’s emissions while ensuring the tax burden remains progressive.

Having been taught using CORE’s The Economy by Yann Algan, one of the authors, he says he “very much liked the approach taken by the book to focus on recent economic developments and discuss them using economic theory … I always wanted to provide solutions based on data.”

What motivated him to create this report? “German politicians complain that young people protest but do not provide solutions, I wanted to prove them wrong. Shortly before I started to write my report, the German government struck a deal concerning the last coal power plants, making the traffic sector the most polluting sector without a clear strategy on how to tackle it.” 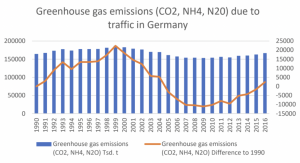 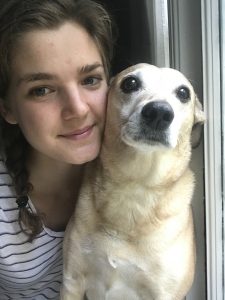 The judges enjoyed the clarity of Susanna’s report (pictured with Abby, right), which used German survey data to investigate attitudes to the climate emergency. (“Clearly and concisely written with good, understandable, well-chosen graphics and a coherent analysis of the data … Gave practical specific policy recommendations.”)

The data demonstrated that respondents worried equally about this problem, regardless of income, age, knowledge or occupation. But respondents also, as Susanna points out (see the figure, below), “largely felt that it is unfair for households to bear the costs of mitigation, that they already pay enough, and that industry does too little.”

Susanna is about to start the fourth year at Swarthmore College in the US, and has just spent a year studying at Mansfield College, Oxford. As a liberal arts college, Swarthmore students settle on their major after they arrive, and luckily for us Susanna chose economics, with a second major in philosophy.

“Economics gives a structure and a set of important tools for understanding important social issues, that are indispensable in designing intelligent policy. I was initially drawn to philosophy for the way it complements economics, with its emphasis on looking for reasons and questioning the significance of assumptions that we take for granted,” she says.

Her policy recommendations draw on successful existing examples of communication about the environment to suggest some guiding principles for clear public communication about environmental issues: for example, by connecting communication to everyday habits. “It is really easy to feel that our personal choices don’t have much of an impact on the global climate, especially when it’s not easy to see their aggregate effects … These answers should guide public messaging in order to make costs feel more fair and purposeful, and to make climate change mitigation into a more unifying cause,” she says. 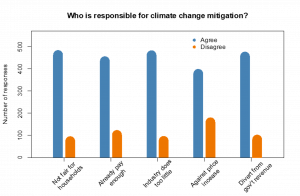 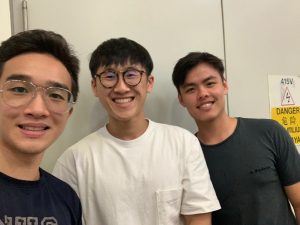 While the other three winners all write about aspects of climate change, our runners up (left to right: Joshua, Jing Hong, Reagan) in the Excel category investigated an under-reported impact of the Global Financial Crisis: whether there might be a relationship between a recession and a stock market crash and mental well-being. The judges commended the choice of a difficult subject for which data analysis can be problematic, and the clear presentation of both the question and the data.

The analysis used stock market data on rates of suicide and mental health to infer, among other things, that: “an excess 6,420 suicide deaths can be attributed to the recession and stock market crash effect.” (see their figure, below). Their policy recommendations include protecting retirement saving from the full impact of stock market crashes, and early-years education policies focused on mental health.

Joshua and Reagan have just finished year two of economics at UCL, and Jing Hong has recently completed his final year on the same course.

“We developed a keen interest in value investing, in which psychological aspects are of paramount importance to decision-making. This motivated us to explore the relationship between a stock market crash and mental well-being,” Reagan explains, “Data-handling skills will definitely be an important skill to have. But the real challenge for us is to interpret the data accurately, without any form of bias.” 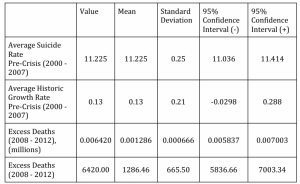 Our goal for this competition was not just to inspire some excellent investigation and policy work, but also to learn more about how Doing Economics can be used as a stepping-off point for original, creative work.

If that was possible, we reasoned, then our projects could be integrated with many types of study, including high school and university courses, continuous professional development (CPD) training, and self-study. Our winners show how our data-led projects can build on teaching in economics, as a practical application of economic models; for social sciences, as a way to investigate how the conceptual frameworks and policy options can be taken to data; in statistics, as a way to use techniques to evaluate pressing social problems, and as a way to evaluate the practical impact of ethical choices, in a PPE-style context.

We are currently finalising our second beta release. If you are considering ways to use one or more of the projects in Doing Economics in 2019-2020, please let us know, and we will do our best to help you.

“We were able to encourage entrants to think more carefully about how variables are measured, and the limitations of data, as well as the usefulness of data to evaluate situations and inform policymaking,” Eileen says, “I was hoping that they would find new and creative ways to use the data. And we definitely got that—they explored a wide range of issues, going far beyond the tasks in Doing Economics.”