Using CORE Econ to bridge the education divide in Colombia

An innovative use of the CORE Econ curriculum has both deepened understanding of economic inequality in Colombia and helped build a bridge between different sections of society in the Latin American country.

Students at a prestigious private school and undergraduates at a university on scholarships from public schools have worked together to investigate the issues behind inequality using CORE Econ’s The Economy ebook and curriculum.

“Colombia is one of the most unequal countries in the world,” says Juan Pablo Castilla. Recent analysis showed that 43 per cent of the adult population had an income below the poverty line of 375,000 pesos (USD100) per month in 2020 of whom a third were in extreme poverty.

Juan Pablo runs classes attended by pupils at the school where he is the economics teacher, Colegio Los Nogales, and economics students at the Universidad de Los Andes who have won scholarships from their public high schools.

They have collaborated on projects in the first unit of The Economy that begins by looking at income inequality. The interactive nature of the ebook means that they used the three-dimensional dynamic graph in the opening pages of the book which enables students to see how inequality widened within and between countries over time. 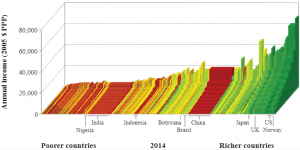 They could select different countries in order to make an assessment about Colombia’s economic inequality compared to the rest of the world. They also looked at different types of data from the World Bank to understand inequality as a broader phenomenon beyond income disparities (just as the The Economy’s Capstone Unit 19 “Economic Inequality” does). Students analysed gender and racial differences between and within countries in, for example, access to health and enrolment in education.

Students Natalia Bedoya and Manuela Gómez worked on a collaborative project between Nogales and Los Andes students. They mentioned how this experience prompted their drive to address inequality: “It was exciting to work with real world data from Colombia and the world,” says Natalia. “Discussing with different students reminded me that we can become better human beings and solve a national and global problem by portraying acts as simple as evading misjudgements” comments Manuela.

Juan Pablo says The Economy acts as a tool that students can use to compare different metrics of inequality. For one exercise, they re-interpreted the 90/10 ratio and compared the costs of education at Los Nogales with monthly incomes of different sectors of the Colombian population. They were shocked to realize that the fees at Los Nogales equate to 8 times more than the income of half of the Colombian adult population. Students then engaged into an active debate about the actions we can take to overcome this issue.

He says The Economy is the ideal book to use, firstly because the ebook is free and secondly, because it is available in both English and Spanish, which ensures that there are no language barriers for the collaborative classes. “The Economy is free and if it wasn’t, I would not use it because I can’t ask the students who won the scholarship to buy an expensive textbook” Juan Pablo says. “Because it is in Spanish, that opens it up to a broader population.”

Another benefit of using The Economy in a country like Colombia is that, unlike most conventional economics textbooks that are rooted in the North American experience, The Economy takes its example from emerging and developing countries. 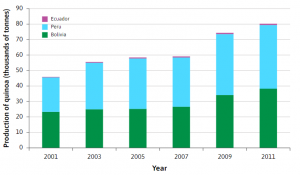 For example, Unit 8 on supply and demand includes a focus on quinoa, the cereal crop grown on the Altiplano, a high barren plateau in the Andes of South America. It shows how demand from health-conscious consumers in Europe and North America brought a mixed blessing: export sales for producers but a more expensive product for local people and an incentive for the US and France to increase production. This would not feature in a mainstream textbook.

As Camilla Cea, then a recent graduate from the University of Chile, wrote in the preface to the 2014 beta edition of The Economy: “I remember asking myself if my economics classes would ever get around to addressing the questions that motivated me to take up economics in the first place. That’s why my colleagues in the CORE team have created this material.”

Certainly, both groups of students from Los Andes and Los Nogales have enjoyed the collaboration. One Los Andes student told Juan Pablo he particularly enjoyed the course because he was interested in history. What helped him engage with the unit on inequality was his interest in the history of capitalism and the Industrial Revolution.

The lesson also chimed with a student at Los Nogales, who wrote in a project essay: “motivated each one of the students involved in the project to actually work on inequality around Colombia and how to portray acts as simple as evading misjudgement to become better human beings and solve a national and global problem.”

This synchronicity of critical thinking by two students from different social and economic backgrounds learning about the same issue is exactly why Juan Pablo believes that the CORE Econ curriculum can — and should — play a wider role in the education systems of countries like Colombia.

“I do believe inequality is one of the big issues we have to address,” he says. “I want to build bridges between different types of schools and social contexts. They have been working together as friends and while they build projects, they learn from each other.”