What next for CORE?

In our previous blog from our 2020 symposium at the Bank of England we covered what we have achieved so far. But most of our agenda was dedicated, quite rightly, to what comes next. Here are three highlights from the day.

One of the inspirations for CORE was the pent-up frustration of students on economics courses, many of whom seemed to view these courses as something that was done to them, rather than something that they participated in. This should be a golden age to study economics, and to use that knowledge to change the world for the better. Students still deserve more from their courses to help them along that path, and we’re working with teachers to find more ways in which they can use the principles they learn in CORE to understand the world, and maybe use economics to change it.

As Wendy Carlin, project director at CORE, told the learners in our audience, “We want more curious students to create a stronger democracy, and better policies.”

At the symposium we welcomed two inspirational groups of students who showed us how they had taken CORE’s principles and used them to help explain their experience of the world around them. From the University of Stirling Management School, MSc business students Anja Gaenssle, Kriti Singhal, Wenjun Ma, and Ashan Abeyratne spoke about how they had applied concepts like game theory, feasible sets, and other-regarding preferences to understand news and current events.

“CORE has provided a practical platform to decode social news,” Ashan said. “”The relevance of economics for us has been rekindled,” Kriti agreed.

Also visiting from the University of Exeter, Jiangshan Li, Gadibalwe Masalela and Nariman Hanno, three students from the quantitative methods course taught by Carlos Cortinhas that uses projects from Doing Economics, spoke about their project to explore how governments could measure support for policies to mitigate climate change.

“We have a pipeline that is more male and privately educated than other university disciplines,” says Sarah Smith, head of Economics at the University of Bristol, “Economics has an image problem.”

Sarah is one of the organisers of Discover Economics, the Royal Economic Society-backed initiative to bring the excitement of economics to schools, not least those that have no economics teaching. We support the effort, and have also been attempting to create an economics teaching that is more relevant to women and people of colour.

Discover Economics aims to interest a more diverse group of school students in taking economics. It’s clear that to be part of this effort, we need to work as much as we can with schools, to reach children as they make important decisions between the ages of 15 and 17. Discover Economics is doing this by, among other things, creating a team of student ambassadors to visit schools.

Our attempt to reach potential economics students in secondary education has just begun, and we intend to do more. In France, Econofides already recasts our material for 260,000 school students each year. In the UK CORE’s Schools Economics Challenge has proved popular. Andrew Sykes, head of economics at St Paul’s School and a member of the CORE team who focuses on outreach to schools point out that the challenge, which asks students to use CORE’s material to make a video, doesn’t just develop technical economics skills: it helps show students that economics is about problem-solving, creativity, and evaluating a wide range of ideas. “The skills that the competition develops in partnering are especially important,” he explains.

Every year we make word clouds of what students tell us are the pressing problems in society that economics should be addressing. We have noticed that the word clouds have recently changed. First, look at this one, drawn from responses given by the Bank of England’s new recruits in 2016: 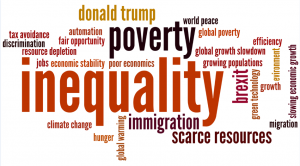 Sam Bowles, whose work has steered CORE’s content since the outset, points out that inequality has been a “Golden thread” through our treatment of the economy: why are some nations and people rich, and others poor? How does the power or individuals or groups change the possible outcomes in society? What is fair, what is feasible, and how should policymakers respond? We have dragged these ideas, normally kept for later studies in economics, into introductory courses, where they should have been for many years already.

Now look at this word cloud from UCL’s new intake of economics students in 2019:

It is clear that mitigating the effects of the climate crisis present an important set of challenges for the next generation of economics policymakers, many of whom are now students who will be studying CORE in the next few years. Sam argued that this crisis mirrors the changes in the world that inspired the last great revision of introductory teaching, Economics by Paul Samuelson, published in 1948. “I suggest that climate change is today what the great depression was for Samuelson,” he said, and so will have a much greater influence on The Economy‘s next version, just as the crisis will have a much greater influence on public policy.

Our existing emphasis on the biosphere, sustainability, and social preferences have all been innovations for introductory courses, but climate change means the innovations are just beginning: students need an economics in which change is not always marginal, and in which social preferences and positive feedbacks create sudden jumps, tipping points and multiple equilibria.

“What will a non-marginal economics look like?” Bowles asks, pointing out that we already have some clues from CORE’s existing units on the environment and financial crises. Look at figures 17.24 and 20.24 in The Economy, dealing with tipping points in the housing market and climate: 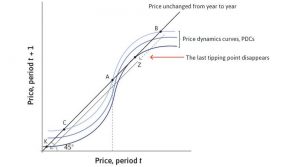 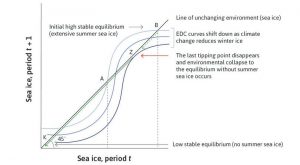 “We want to make the modelling of instability and non-marginal changes essential tools in introductory economics,” Sam says, “These are really hard problems and we need all your help … but we think we can do it.”